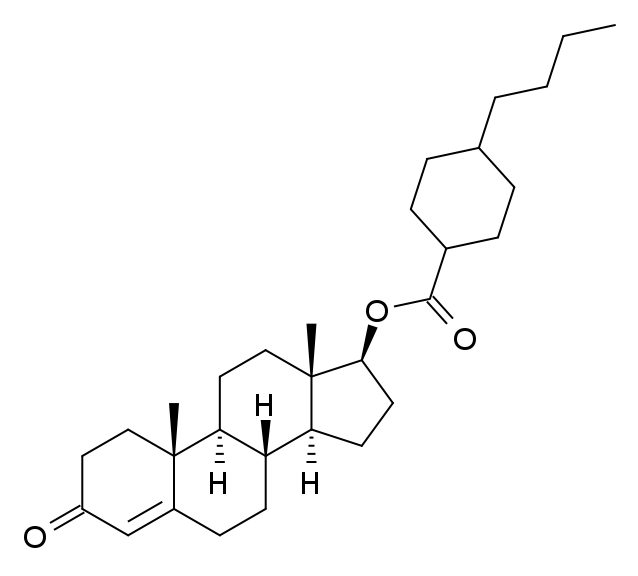 Testosterone buciclate is a more recently developed injectable testosterone preparation, which utilizes the extremely long, highly oil-soluble, and very slow-acting buciclate ester (also commonly referred to as “20 Aet-1”). At 20 carbon atoms in length, the buciclate ester is the largest ester used to make an injectable steroid preparation. It is about seven times longer than propionate, three times longer than enanthate, and double the length of decanoate. Being that the carbon content of the ester correlates closely to the duration of release, testosterone buciclate is also the longest acting injectable testosterone medication yet to be tested in humans. It appears to be even longer acting than Nebido® (testosterone undecanoate), although both drugs are promising a similar 12-week window of therapeutic effect. When administered to patients suffering from primary hypogonadism as part of initial clinical studies, a single 600 mg injection of testosterone buciclate was able to maintain therapeutically effective concentrations of testosterone for approximately 12 weeks. No significant peaks were noted in testosterone levels in either group, which are normally observed with esters like enanthate and cypionate. There were no significant side effects, or unfavorable changes in urine flow, PSA (prostate specific antigen) values, or prostate volume. Testosterone buciclate seems to hold a good deal of promise as a slow-acting injectable androgen, with the potential to replace other common esters used for hormone replacement therapy.

Testosterone buciclate was first described in 1986. It was developed as part of a steroid synthesis program that was initiated by the World Health Organization. The focus of this program was to develop longer-acting esters of testosterone, which improved on the disadvantages of existing esters such as enanthate and cypionate, which tended to produce short supraphysiological surges in androgen levels, followed by steadily declining and uneven androgen levels until the next point of administration. Phase-1 clinical studies were completed in 1992 (described above), and supported the potential adoption of this agent for the treatment of andropause. Studies conducted three years later suggest the drug may also be useful for male contraception. Testosterone buciclate has already seen a considerable amount of study at this point, but, unlike its similarly slow-acting cousin Nebido®, has yet to be adopted as a prescription drug for widespread use.

Testosterone buciclate is not currently available as a commercial drug product.

Testosterone is readily aromatized in the body to estradiol (estrogen). The aromatase (estrogen synthetase) enzyme is responsible for this metabolism of testosterone. Elevated estrogen levels can cause side effects such as increased water retention, body fat gain, and gynecomastia. Testosterone is considered a moderately estrogenic steroid. An anti-estrogen such as clomiphene citrate or tamoxifen citrate may be necessary to prevent estrogenic side effects. One may alternately use an aromatase inhibitor like Arimidex® (anastrozole), which more efficiently controls estrogen by preventing its synthesis. Aromatase inhibitors can be quite expensive in comparison to anti-estrogens, however, and may also have negative effects on blood lipids.

Estrogenic side effects will occur in a dose-dependant manner, with higher doses (above normal therapeutic levels) of testosterone more likely to require the concurrent use of an anti-estrogen or aromatase inhibitor. Since water retention and loss of muscle definition are common with higher doses of testosterone, this drug is usually considered a poor choice for dieting or cutting phases of training. Its moderate estrogenicity makes it more ideal for bulking phases, where the added water retention will support raw strength and muscle size, and help foster a stronger anabolic environment.

Testosterone is the primary male androgen, responsible for maintaining secondary male sexual characteristics. Elevated levels of testosterone are likely to produce androgenic side effects including oily skin, acne, and body/facial hair growth. Men with a genetic predisposition for hair loss (androgenetic alopecia) may notice accelerated male pattern balding.Those concerned about hair loss may find a more comfortable option in nandrolone decanoate, which is a comparably less androgenic steroid. Women are warned of the potential virilizing effects of anabolic/androgenic steroids, especially with a strong androgen such as testosterone. These may include deepening of the voice, menstrual irregularities, changes in skin texture, facial hair growth, and clitoral enlargement.

Testosterone does not have hepatotoxic effects; liver toxicity is unlikely. One study examined the potential for hepatotoxicity with high doses of testosterone by administering 400 mg of the hormone per day (2,800 mg per week) to a group of male subjects. The steroid was taken orally so that higher peak concentrations would be reached in hepatic tissues compared to intramuscular injections. The hormone was given daily for 20 days, and produced no significant changes in liver enzyme values including serum albumin, bilirubin, alanine-amino-transferase, and alkaline phosphatases.

Anabolic/androgenic steroids can have deleterious effects on serum cholesterol. This includes a tendency to reduce HDL (good) cholesterol values and increase LDL (bad) cholesterol values, which may shift the HDL to LDL balance in a direction that favors greater risk of arteriosclerosis. The relative impact of an anabolic/androgenic steroid on serum lipids is dependant on the dose, route of administration (oral vs. injectable), type of steroid (aromatizable or non-aromatizable), and level of resistance to hepatic metabolism. Anabolic/androgenic steroids may also adversely effect blood pressure and triglycerides, reduce endothelial relaxation, and support left ventricular hypertrophy, all potentially increasing the risk of cardiovascular disease and myocardial infarction.

Testosterone tends to have a much less dramatic impact on cardiovascular risk factors than synthetic steroids. This is due in part to its openness to metabolism by the liver, which allows it to have less effect on the hepatic management of cholesterol. The aromatization of testosterone to estradiol also helps to mitigate the negative effects of androgens on serum lipids. In one study, 280 mg per week of testosterone ester (enanthate) had a slight but not statistically significant effect on HDL cholesterol after 12 weeks, but when taken with an aromatase inhibitor a strong (25%) decrease was seen. Studies using 300 mg of testosterone ester (enanthate) per week for twenty weeks without an aromatase inhibitor demonstrated only a 13% decrease in HDL cholesterol, while at 600 mg the reduction reached 21 %. The negative impact of aromatase inhibition should be taken into consideration before such drug is added to testosterone therapy.

Due to the positive influence of estrogen on serum lipids, tamoxifen citrate or clomiphene citrate are preferred to aromatase inhibitors for those concerned with cardiovascular health, as they offer a partial estrogenic effect in the liver.This allows them to potentially improve lipid profiles and offset some of the negative effects of androgens. With doses of 600 mg or less per week, the impact on lipid profile tends to be noticeable but not dramatic, making an anti-estrogen (for cardioprotective purposes) perhaps unnecessary. Doses of 600 mg or less per week have also failed to produce statistically significant changes in LDL/VLDL cholesterol, triglycerides, apolipoprotein B/C-lll, C-reactive protein, and insulin sensitivity, all indicating a relatively weak impact on cardiovascular risk factors. When used in moderate doses, injectable testosterone esters are usually considered to be the safest of all anabolic/androgenic steroids.

To help reduce cardiovascular strain it is advised to maintain an active cardiovascular exercise program and minimize the intake of saturated fats, cholesterol, and simple carbohydrates at all times during active AAS administration. Supplementing with fish oils (4 grams per day) and a natural cholesterol/antioxidant formula such as Lipid Stabil or a product with comparable ingredients is also recommended.

All anabolic/androgenic steroids when taken in doses sufficient to promote muscle gain are expected to suppress endogenous testosterone production. Testosterone is the primary male androgen, and offers strong negative feedback on endogenous testosterone production. Testosterone-based drugs will, likewise, have a strong effect on the hypothalamic regulation of natural steroid hormones. Without the intervention of testosterone stimulating substances, testosterone levels should return to normal within 1-4 months after the drug has fully cleared the body. Note that prolonged hypogonadotrophic hypogonadism can develop secondary to steroid abuse, necessitating medical intervention.

To treat androgen insufficiency, clinical protocols support the use of 600 mg every twelve weeks. For bodybuilding purposes, supraphysiological (rather than physiological) hormone levels would require injecting the drug on a more regular basis. The most effective use of this compound in a bodybuilding sense would probably entail the injection of two or more doses of 600 mg in the first two weeks of a cycle. After this point another full dose might be given every 7-15 days, depending on the desired potency or other steroids used. The drug could be discontinued 6-9 weeks before the cycle is going to be concluded, and may cause androgen levels to remain elevated 12 weeks or more after the last dose is given. Post-cycle therapy should be planned accordingly. Testosterone is ultimately very versatile, and can be combined with many other anabolic/androgenic steroids depending on the desired effect.

In the context of bodybuilding, testosterone buciclate will be an effective drug, but it is probably not going to win any awards. For one, a cycle based on this compound would be somewhat slower to start than normal, as it will take time and numerous injections for peak blood levels of testosterone to bq reached. For the same reason, testosterone buciclate will end up offering its greatest value in cycles lasting more than 4 or 5 months, where its slow-acting nature may be beneficial by allowing a less frequent injection schedule and greater user comfort. In short cycles, this same trait will just be a hindrance, delaying the achievement of supraphysiological testosterone levels (compared to faster testosterone esters) and a strong anabolic effect.

Testosterone buciclate has not been studied in women. This drug is not recommended for women for physique-or performance-enhancing purposes due to its strong androgenic nature, tendency to produce virilizing side effects, and very slow- acting characteristics (making blood levels difficult to control).

As testosterone buciclate is still really a research drug in Europe, it is not readily available on the black market at this time. It will not be seen in volume until it is adopted for prescription use in a steroid source country, or the various underground labs decide to take an interest in it. Until then, it remains a drug of academic interest only.

Your experience with 20AET-1 — testosterone buciclate