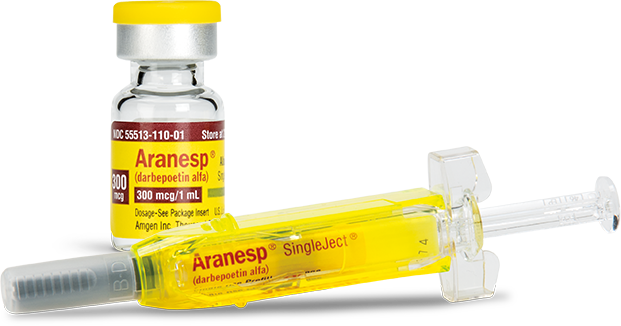 Darbepoetin alfa is a synthetic derivative of the human erythropoietin protein. It also has the same pharmacological action as recombinant human erythropoietin (epoetin alfa). In the body, erythropoietin is normally released by the kidneys in response to hypoxia (low blood oxygen levels). This in turn triggers bone marrow to increase red blood cell production. As such, this hormone is vital to the regulation of normal red blood cell concentrations in humans. With a similar mode of action to recombinant erythropoietin, darbepoetin alfa can be used to augment erythropoiesis when the body is not maintaining adequate red blood cell levels on its own. It is FDA approved for the treatment of anemia (low red blood cell count) associated with chronic renal failure or chemotherapy. Darbepoetin alfa differs from recombinant human erythropoietin (epoetin alfa) mainly in its duration of activity. This new protein maintains its levels in the blood for approximately three times longer, causing it to have a much longer therapeutic window. This means that with darbepoetin alfa patients are required to administer the product much less frequently than they wouldepoetin alfa. Whileepoetin alfa is usually injected on a schedule of three times per week, darbepoetin alfa requires only one injection in the same time frame. This may enhance patient comfort considerably, especially when the patient is visiting the physician for routine drug administration. Endurance athletes are highly attracted to darbepoetin alfa for the effect it has on red blood cell production. It is no secret that the practice of blood doping has been popular with endurance sports. This procedure involves removing, concentrating, and storing a quantity of red blood cells from your own body to be transfused later. By adding the stored cells before an event (by then the body has restored the lost blood volume), the athlete has a much greater concentration of red blood cells. The blood should, likewise, transport oxygen more efficiently, and the athlete may be given a significant endurance boost. This procedure can be quite risky, however, as blood products can be difficult to store and administer correctly. Darbepoetin alfa is a drug that basically equates to chemical blood doping, and can achieve the same end result (higher red cell concentrations) with the use of a simple medication.

Darbeopetin alfa was developed as a prescription drug by Amgen. The U.S.Food & Drug Administration first approved it for sale in 2001. Amgen is the world’s largest biotechnologies company, and the same firm that first brought recombinant erythropoietin (epoetin alfa) to the U.S. market in 1984. The main focus with darbepoetin alfa appears to have been the development of a much longer acting erythropoietic protein in comparison to their earlier recombinant erythropoietin, which is commonly injected on a schedule of three times per week. The prescribing guidelines for darbepoetin alfa recommend a once per week schedule, which seems to offer strong comfort advantages to epoetin alfa for patients that do not like receiving frequent injections. Darbepoetin alfa has not yet reached the level of market success that has been noted with epoetin alfa preparations, but has been a strong selling drug for Amgen ever since its release.

How is Darbepoetin Alfa Supplied

Darbepoetin alfa is a 165-amino acid protein that differs from human erythropoietin by the substitution of amino acids on the erythropoietin peptide backbone, which allows the addition of two additional N-linked oligosaccharide chains.

The misuse of darbepoetin alfa for physique- or performance-enhancing purposes is characterized as a high-risk practice. Like traditional blood doping methods, darbepoetin alfa can produce an abnormally high concentration of hemoglobin in the blood (polycythemia), which may result in heart attack, stroke, seizure, or death.

Some forms of darbepoetin alfa contain albumin, a purified human blood product. Although effective donor screening and product manufacturing procedures are in place, it still carries a risk, though extremely remote, for transmission of viral disease.

Side effects associated with the use of darbepoetin alfa may include flu-like symptoms such as fever, chills, headache, muscle pain, weakness, or dizziness. Such effects tend to be more pronounced at the initiation of therapy. Other adverse reactions may include infection, rash, swelling of the skin, nausea, vomiting, diarrhea, high blood pressure, low blood pressure, cough, bronchitis, or edema. In some instances darbepoetin alfa has been associated with thromboembolism, deep-vein thrombosis, pulmonary embolism, heart attack, and cerebrovascular accidents.

Darbepoetin alfa is not widely sold on the black market. Yet because of the high cost of erythropoiesis stimulating agents like darbepoetin alfa, it is a high profile target for counterfeit drug manufacturing operations. Counterfeit drugs of this class have even infiltrated legitimate pharmaceutical distribution channels, suggesting that care should be taken when purchasing this and similar drug products.

Your experience with Aranesp — darbepoetin alfa