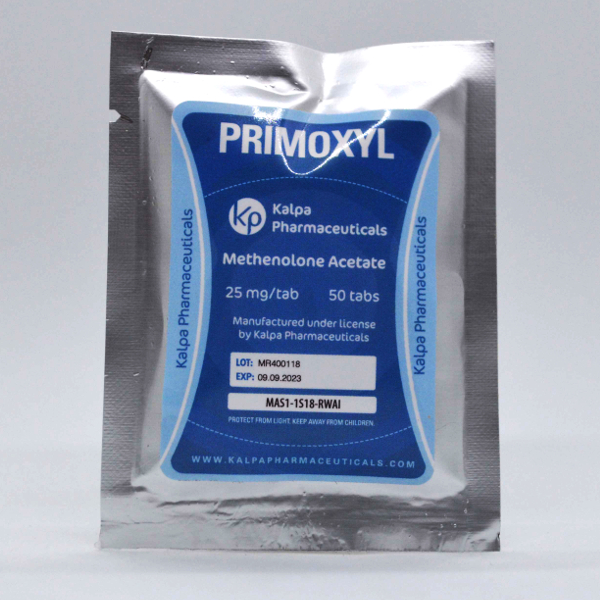 Primoxyl is an oral anabolic and androgenic steroid made by Kalpa Pharmaceuticals. It contains 25 mg of Methenolone Acetate per each tablet.

Primoxyl is a DHT based steroid made by Kalpa Pharmaceuticals, being available as oral pills or an injectible form. Interestingly, unlike most oral steroids, Primoxyl is not c-17 methylated, meaning it will not pose a major risk to your liver, but as a trade off is only about 50% available for absorption. In many folks, it seems like Primobolan is hit-or-miss; largely due to wrong dosing. You see, the drug is pretty expensive, and many persons trying to economize actually use a lower dose than is effective, and write it off as a waste. In reality, Primoxyl is a very good, but slow, lean mass and strength builder, being a favorite of bodybuilding’s prodigal son, Arnold.

Although Primo can be used anytime, it is not preferred during a mass cycle, but rather as a pre-contest aid to maintain muscle mass while in a caloric deficit. Primoxyl does not aromatize, as a result gains being very dry and keepable after completion of a cycle. Primo has also earned a reputation as quite the “fat destroyer”, as it has been shown to bind to the androgen receptor stronger than testosterone itself. AR binding correlates strongly to the amount of fat loss during an anabolic steroid cycle, as well as the amount of lean mass accrued.

One of the more unique uses of Primo, is its use in women. Primo, along with Oxandroxyl, are the preferred drugs of choice for female athletes, simply because they are not very androgenic and do not carry a high virilization risk. Even if the slightest sign of it were to set in motion, discontinuation of the Primo tabs would result in resolution of the pesky symptoms.