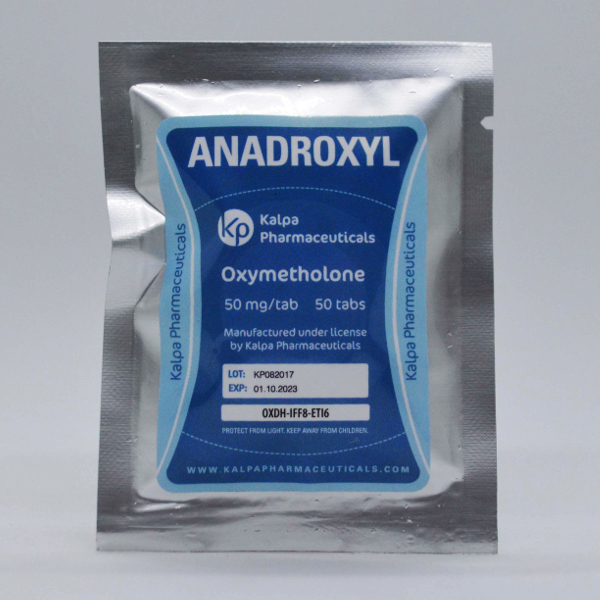 Anadroxyl is an oral anabolic and androgenic steroid made by Kalpa Pharmaceuticals. It contains 50 mg of Oxymetholone per each tablet.

Anadroxyl is the generic name of the anabolic steroid Anadrol and it is being manufactured by Kalpa Pharmaceuticals. Oxymetholone was first popularized during the 1960’s, where its use quickly spread and became mainstream. Oxymetholone is undoubtedly one of the strongest mass builders in the world; it is currently used to combat wasting disease associated with AIDS and is effective in treating anemia, as it rapidly increases red blood cell count. However, athletes today have been shying away from the use of oxymetholone, due in part to its extreme risk of side effects

Even though the drug possesses considerable risk of side effects, there are still quite a few persons who swear by oxymetholone, as it can be an invaluable aid to the athlete.

Oxymetholone has an anabolic rating of 320, translating to its high ability to produce lean muscle gains. Oxymetholone is a DHT based steroid, which in theory should be resistant to estrogenic side effects, but still carries the risk of water retention. As such, it is excellent for off cycle use when joint support is warranted to cushion the impact from heavy weights.

Oxymetholone can also be effectively used during contest preparation; given that the user does not experience estrogenic effect during the off season.

It can promote volumization of muscles, to give the look of full muscles, even if the athlete has been dieting.

Anadroxyl can improve endurance significantly, and can help runners perform longer without getting a strong lactic acid burn. This effect is a result of increased red blood cell production, which enables peak performance for longer.

Anadroxyl can be used either at the start of a cycle, to kick-start gains while the slower acting injectibles are getting primed, or mid cycle to provide a boost, when results seem to be getting a plateau.

Doses of between 25-50 mg daily seem the sweet spot, as the maximum beneficial dose is 100mg, used by experienced lifters.