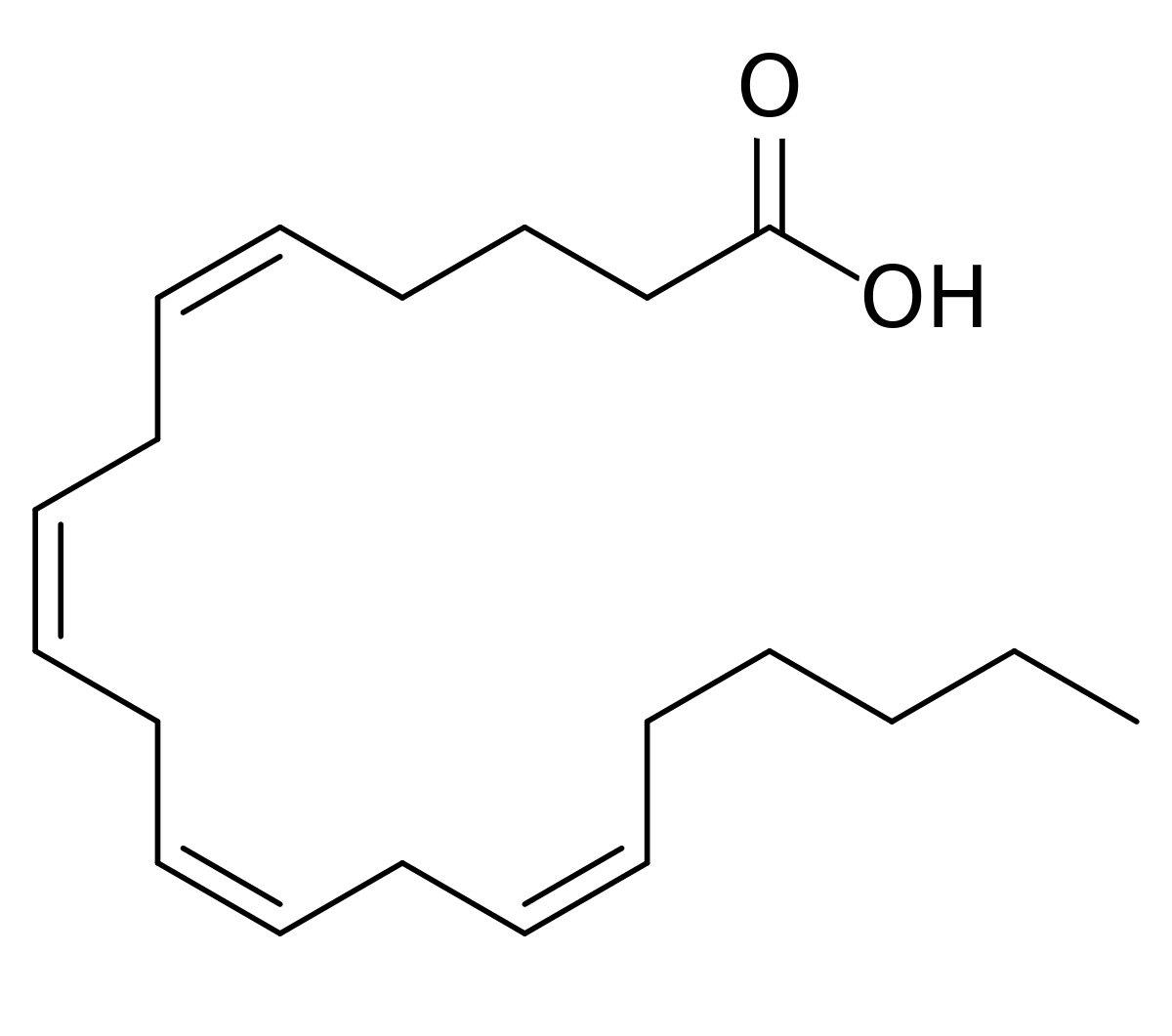 Arachidonic acid is an omega-6 essential fatty acid that serves as the principle building block for the synthesis of dienolic prostaglandins (such as PGE2 and PGF2a). These prostaglandins are integral to protein turnover and muscle accumulation, and have such important activities as increasing blood flow to the muscles (pumps), increasing local IGF-1 and insulin sensitivity (corresponding receptor levels), supporting satellite cell activation, proliferation, and differentiation, and increasing the overall rate of protein synthesis and muscle growth. Arachidonic acid release serves as the main thermostat for prostaglandin turnover in skeletal muscle tissue, and is responsible for initiating many of the immediate biochemical changes during resistance exercise that will ultimately produce muscle hypertrophy. As such, it is a highly anabolic nutrient. Among the large variety of nutrients available to athletes and bodybuilders for supplementation, next to protein, arachidonic acid is the most integral to muscle growth, as it sits at the very center of the anabolic response.

In 2005, the Exercise & Sport Nutrition Laboratory at Baylor University conducted a double-blind placebo-controlled study to determine if 50 days of resistance training and arachidonic acid (X-Factor™) supplementation would affect training adaptations in 31 experienced (>1 year) resistance-trained males. The results were presented at the International Society of Sports Nutrition conference on June 15, 2006. All subjects ingested a total of four capsules each day (one 250 mg capsule of AA or placebo every four hours). Subjects taking X-Factor added an average of 25lbs to their bench press maximum weight in 50 days, which was an increase of nearly 45% greater than the placebo group. The XFactor group outperformed the placebo group on Average Power (225% > placebo), Peak Anaerobic Power (600% > placebo), and Total Work Capacity (250% > placebo). No side effects were reported during the investigation.

Arachidonic acid begins to display its anabolic activity early during exercise. This nutrient is released from your muscle fibers as they are damaged during intense training, triggering a localized inflammatory and anabolic response. This is part of the same biological process that causes you to be sore a day or two following a good workout, and reminds us that the old adage “no pain, no gain” is a fundamentally true one. Arachidonic acid liberation from damaged muscle fibers is, similarly, the very first anabolic trigger in a long cascade that will control the rebuilding and strengthening of muscle tissue after exercise. Among other things, by increasing local IGF-1 and insulin receptor density, arachidonic acid supports the anabolic actions of these hormones, making the repair process both faster and more intense. As a crude explanation, arachidonic acid helps direct the body to where it needs muscle tissue repair by facilitating the localized actions of anabolic hormones.

The arachidonic acid supplementation protocols, and the concept of using this nutrient to improve muscle mass, strength, and performance, were first developed by William Llewellyn, author of this book series. Llewellyn filed patent on the technology on November 27, 2002, and released an arachidonic acid supplement under the X-Factor trademark (Molecular Nutrition) shortly after. Although the product was initially met with a great deal of skepticism and criticism by industry peers, it has since been proven effective both in the marketplace and in clinical trials, and established itself as a powerful supplement for body recomposition goals. The U.S. Patent & Trademark Office granted Llewellyn’s patent application for arachidonic acid on January 11, 2005 (U.S. Patent # 6,841,573), and the product has since been offered for license to other companies in the industry. The original X-Factor product remains widely available in the U.S. and abroad, and rapid expansion in the arachidonic acid category is expected as more companies license the technology. Note that any officially licensed arachidonic acid product sold in the sports nutrition marketplace will carry the original X-Factor trademark on its packaging.

Arachidonic acid (eicosa-5,8,11,14-enoic acid) is an essential polyunsaturated fatty acid found in animal fats. Supplemental arachidonic acid is commonly produced in two forms, triglyceride and ethyl ester. As with other fatty acid supplements such as fish oils, the natural triglyceride form (as present in X-Factor and licensed products) offers up to 400% greater absorption than the ethyl ester, and is the preferred form for supplementation.

How is Arachidonic Acid Supplied

Arachidonic acid is sold under the X-Factor trademark by Molecular Nutrition, and is supplied in 250 mg capsules. Arachidonic acid may also be found in a number of licensed products; all will display the patent number (#6,841,573) on the packaging.

As a short-term anabolic agent, arachidonic acid is supplemented at a dose of 500 mg to 1,000 mg per day (2-4 250 mg capsules). The full 1,000 mg dose is most commonly used, regardless of bodyweight. The nutrient is cycled in the same way steroids commonly are, and is taken for a period of 7-8 weeks followed by an equal amount of time off. This level is sufficient to notice measurable increases in lean muscle mass, strength, and anaerobic power. Depending on dietary and individual metabolic factors, these gains may be accompanied by a decrease in body fat. Gains of 1-2lbs of lean muscle mass per week are fairly consistent, with total accrued weight gain often measuring approximately 10lbs during a cycle. There is also no hormonal disruption with arachidonic acid supplementation, so the retention of gains after the product is discontinued is generally high. Note that arachidonic acid also has some effect as a vasodilator, and may produce increased pumps in response to intense training. This often occurs within two weeks of initiating supplementation at anabolic levels.

Arachidonic acid may also be an important nutrient to consider in regular supplemental doses, particularly if you do not consume animal products (red meat, organ meat, eggs) on a regular basis. Studies have shown that given somewhat comparable amounts of protein, those who consume animal products will make more progress with resistance exercise than those that do not (vegetarians). Arachidonic acid may be the missing component in such diets, too integral to the anabolic response for lower dietary levels not to be noticed. There is also empirical evidence suggesting that an arachidonic acid deficiency exists in many experienced bodybuilders, given that training depletes AA stores. On a number of cases, tissue tests for the content of phospholipids have revealed unusually low levels of arachidonic acid in highly trained athletes. For those who find their intake of animal products inadequate, or feel that they may have insufficient tissue stores of AA, a single capsule of 250 mg provides about the equivalent of a day’s supply of arachidonic acid within a normal western diet with animal products. Taken every day or two, the capsule should provide a necessary supply of this essential omega-6 fatty acid.

In clinical studies involving the supplementation of 1,500- 1,700 mg of arachidonic acid per day, general markers of health were also unaffected with 50 days of continuous use. This includes no notable change in HDL, LDL, or total cholesterol values, immune system response functioning, or platelet aggregation values. Furthermore, the investigation at Baylor University demonstrated safety on all of the basic markers of health including lipids, blood pressure, blood cell counts, immune system mediators, and liver enzymes. The study also produced a strong trend for reduced IL-6 in the X-Factor supplemented group, which is a principle inflammatory cytokine and stimulus for the hepatic production of C-reactive protein. High levels of IL-6 are correlated with poor health and mortality, and are deemed undesirable. The results suggest that while arachidonic acid may be “proinflammatory” in the sedentary (inactive) state, when combined with resistance training, a reduction in systemic inflammation may actually be noticed. It is speculated that an amplification of some of the health-beneficial aspects of resistance exercise, namely the improved management of insulin, may be responsible for reducing this inflammatory marker.

On a more general note, the American Heart Association announced its position on Omega- 6 EFA consumption in early 2010. In reviewing some of the more current data, they found that diets low in Omega-6 fats were associated with an increased risk of heart disease compared to diets with higher intakes. The paper also discusses arachidonic acid, and how this essential fat is normally not proinflammatory, nor outwardly unhealthy to consume. The American Heart Association now recommends that 5-10% of your calories each day come from Omega-6 fats, including ARA. Diets rich in Omega-3’s are, of course, also healthy, but not at the exclusion of Omega-6’s.

Arachidonic acid (X-Factor) often produces an amplification of residual post-workout (Delayed Onset) muscle soreness. Often recovery is slightly prolonged (perhaps an additional day of rest is required), and the user may need to adjust their schedule accordingly. This is due to an intensification of the normal physiological response to training, and represents increased intensity of the anabolic cascade (and rate of muscle growth). Those with existing minor muscle, connective tissue, or joint injuries may notice more pain, due to the greater prostaglandin signaling caused by supplementation. While arachidonic acid should not exacerbate the injury, if greater soreness interferes with one’s ability to train comfortably, the supplement should be discontinued until the injury is healed. Arachidonic acid supplementation may also produce a greater incidence of headaches in a small percentage of users, which may be due to its effect as a vasodilator. Increasing daily water consumption often alleviates this side effect. Additionally, arachidonic acid seems to produce a very weak androgenic effect in some users, often producing minor oily skin. This may be caused by a slight amplification of testosterone’s effect. It should not be strong enough to concern females about virilizing side effects.

Those with an existing medical condition related to inflammation may find that the added arachidonic acid exacerbates symptoms of their disorder, and should avoid supplementation. This supplement should only be used after the approval of a physician if someone is taking medication, has an existing medical condition, or has a familial predisposition for cardiovascular disease, high blood pressure, or any other disorder that may require the limiting of dietary arachidonic acid. Also, as a potent growth-promoting agent, arachidonic acid joins androgens (testosterone, anabolic steroids), growth hormone, IGF-1, estrogens,and many other growth factors as potentially supporting the growth rate of certain cancer cells if you have the disease. Dietary arachidonic acid intake has been generally eliminated as a causative factor in cancer, just as testosterone level has been eliminated as predictive of prostate cancer risk, however these types of growth-promoting agents should be avoided in such diseased states unless approved by a physician. If you have prostate cancer, for example, the last thing you want to start taking is a growth promoter like testosterone. The same goes for arachidonic acid. The bottom line is that if you are in poor health, you should probably not be taking this supplement. If you are healthy, you should be able to use it with great safety.

Your experience with Arachidonic Acid